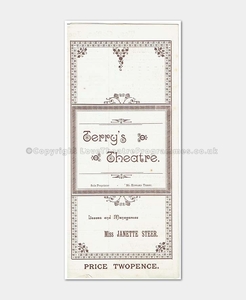 Edward Terry opened his theatre in 1887; it had a short life span and closed in 1910. Notable performances included The Church Warden, which opened the theatre, Sweet Lavender, and My Lady Molly to name but a few. Programmes could therefore be considered as collectable. Interestingly it would appear that Murray Carson (actor/producer of play) and Thornton Clark (writer of play) are the same person.

Two-folded six sided programme with cast list in centre; advertisements around the cast list and on reverse pages.

Condition Code: 4-5: In superb condition, this programme appears to have had very little handling. There is a tiny mark on the front cover and a very small nick, also to the front cover at the bottom; excellent condition for its 120+ years.