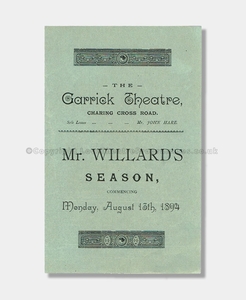 This late 1800 theatre programme is for the performance entitled The Professor’s Love Story; a play in three acts written by the immensely successful playwright by Mr J. M. Barrie (best known for writing Peter Pan) and performed in 1894 at The Garrick Theatre. The front cover reads Mr Willard’s Season, commencing Monday, August 13th, 1894. It’s a charming little programme consisting of a single sheet of paper with a central vertical spinal fold to create four pages. The cast list is presented across page 2 and includes popular performers of the time including Mr E.S. Willard.

Mr E.S. Willard (1853 – 1915), was a prolific English actor/manager who was born in Brighton and started acting at the age of 16; he had an extremely successful stage career in both English and American theatre.

The Garrick Theatre, Charing Cross Road, London, was built in 1889 by Mr W. Gilbert (one half of the famous pair Gilbert and Sullivan). The architects employed for this project were Mr Walter Emden and Mr C.J. Phipps. Although Mr Walter Emden was the primary architect, Mr Phipps was called in when an underground river was discovered during the construction of the theatre. The Garrick Theatre was named after the successful actor Mr David Garrick (1717-1779). Mr Garrick had a long and extremely successful stage career, as well as being an accomplished staged actor, he was also a theatre manager and playwright. The Garrick still stands to this day and holds regular stage performances and is now a Grade II listed building.

Condition Code: 4-5:  The programme has no foxing, splits or tears. Minimal evidence of any handling. Excellent and rare condition for its age.