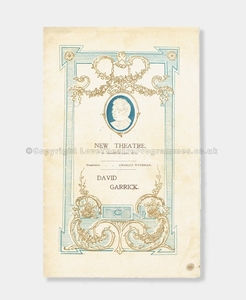 The programme cover pages are made from an oversized cream card with blue and gold print. The cream smooth internal programme pages are smaller than the protective card cover and are printed with brown ink.

A play in three acts that starred the popular actor and proprietor Charles Wyndham.

Charles Wyndham was an English actor born Charles Culverwell (1837 – 1919). He first started acting when he was a young man, having decided that following in his father’s footsteps as a doctor was not his passion.

He went over to the USA to make his fame and fortune however it was during the Civil war and the need for surgeons was much greater than the need for actors so he signed up to the Union army as a surgeon. He eventually resigned from the army and made his way back to England. He became a popular actor in England and America. He accomplished a lot during his lifetime and worked alongside the top of his profession. One of the roles he became best known for was David Garrick.

The cast list is presented across page 4. The programme is minimal and simply laid out with no advertisements for local businesses within the pages.

Condition Code: 4: One small mark on bottom corner of front cover. Minimal foxing. One central staple rusted, but pages firmly secured. Due to the programmes oversized cover pages, the internal pages have been kept in really good condition.

Performance: The Taming of the Shrew