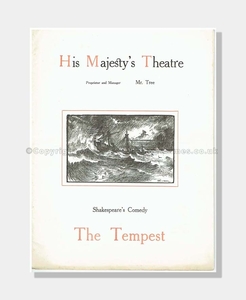 This early, substantial 1900s theatre programme presents Shakespeare’s Comedy, The Tempest. The cover shows an etching by Charles A. Buchel, the prolific artist to the theatre, painting portraits of the theatre stars of the day and for the theatre programmes themselves. He started his career for Mr. Beerbohm-Tree and stayed with him for around 16 years.

Mr. Herbert Beerbohm-Tree played the leading role and produced the play. In a time when plays were becoming more minimalistic, Mr. Beerbohm Tree produced an extravaganza of elaborate sets and grand processions. In 1909 Mr Tree was knighted for service to theatre.

Performance: Funny Side Up