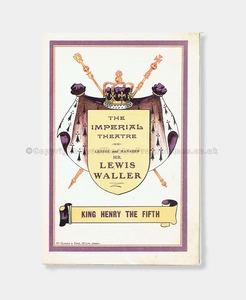 The front cover of this theatre programme is a favoured design of the theatre during this period, namely, a detailed and regal illustration resembling a coat of arms, printed in purple, yellow and orange on stiff cream card. In the centre of the illustration we are introduced to the current Lessee and Manager of the Imperial Theatre, Mr Lewis Waller, who in his own right is an accomplished actor of his time. The page edges of the shine with gold effect ink.

Underneath is the title of the play, King Henry The Fifth, written by William Shakespeare. The music had been specially composed by Mr. Leonard Chalk who was also the musical director to the play.

The cast list is presented across page 2 and we see that Mr Lewis Waller, actor, lessee and manager of the theatre played the main male lead.

The programme consists of 4 pages including front and back cover. Approx. H 20cm x W 14cm

Condition Code: 4-5: Slight nibbling to corners of programme. This decorative theatre programme is in really good condition for its age.