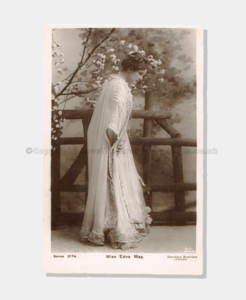 Edna May, Edna May Petty

Edna May, Edna May Petty

In 1897, at the age of 19, Edna May was given the lead role of Violet Grey in The Belle of New York at The Casino Theatre in New York but this was not a huge success. However, in 1898 she brought The Belle of New York to the Shaftsbury Theatre in London, with much acclaim, running for 697 performances, launching her as an international star and theatre sweetheart.

She married her first husband, Fred Titus the famous racing bicyclist, when she was 17, but after she gained fame in London social scene she divorced Titus and married the wealthy American business man Oscar Lewisohn (‘The American Copper King’) in 1907, where she then retired from the life on the stage.

When Mr. Lewisohn died in 1911, Edna was wooed back into the limelight starring in a silent black and white Vitagraph movie, Salvation Joan, which was said to be loosely based on The Belle of New York and famously donated her earnings from this film to charity.

Performance: The Belle of New York