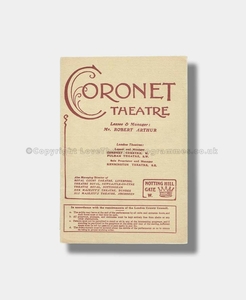 The Coronet Theatre at Notting Hill Gate was a theatre for just 18 years before it became a cinema, but after many different owners and ventures the theatre is now known as ‘The Print Room’ and, since 2014, produces live performances again.

Condition Code: 4-5: The stiffer covers have done an efficient job of protecting the internal pages which are smooth with no folds, nicks or tears. There is a discreet 2cm split at base of spine of cover. Super condition for its 100+ years.