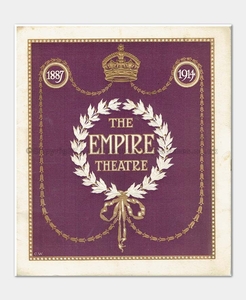 A stunning, rare, souvenir theatre programme has a stiff card cover, elaborately decorated with purple, gold and embossed white, which proudly announces 1887 – 1914. The theatre was actually built in 1884, but in 1887 became a music hall and became known as The Empire Theatre of Varieties. In 1898 the theatre returned to its previous name, The Empire Theatre, and thus remained until it closed and was demolished in 1927. It was rebuilt and opened at the end of 1928 with the latest trend: a silent movie.

This theatre programme presents well known and popular performers of the day, including a young Jack Buchanan, in a wide ranging variety plus the main act…. ’A Mixed Grill’, A Bur-revu-lesque in six scenes.

There are advertisements with beautiful illustrations throughout, all adding to the stories that this historical programme tells.

Condition Code: 4-5: Because of the protection the card cover has afforded the programme, the internal pages are in superb condition with very little evidence of handling at all. A little foxing/age related discolouration on top left of front cover. As to be expected, staples rusty but pages firm and intact.