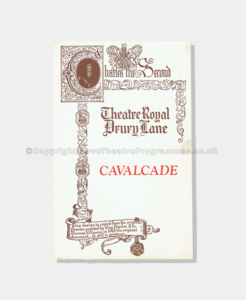 A comprehensive programme printed using black and red ink on cream paper, with a number of black and white photographs of the starring actress Mary Clare; the writer, Noel Coward; the scenery and dress designer G. E. Calthrop. Also included are a variety of advertisements. The play was quite an extravaganza with elaborate sets and large cast. In 1933 it was adapted into a successful film which in turn inspired the famous UK 1970’s series, Upstairs and Downstairs.

The front cover design is copied from the original 1662 charter granted by King Charles II to Thomas Killigrew, who built the first Theatre Royal Drury Lane in 1663. Unfortunately, the original theatre was destroyed by a fire in 1672; in fact there have been four theatres built on the site. The present theatre was opened in 1812 and designed by Benjamin Wyatt.

32 pages including front and back cover

Condition Code: 4-5. In excellent condition except for 3 small tears at the top of the front cover page, staples slightly rusted but intact, seal removed but traces still visible on front and back pages (all are shown on photographs).