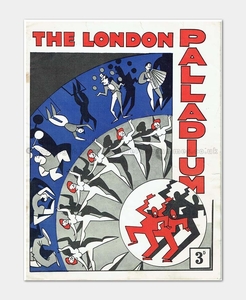 This special 1930s, Flanagan and Allen, theatre programme is made of smooth off white paper printed with blue red grey and black inks. The front cover has colourful illustrations of the variety act performers, which really sets the tone for the programme.

The acts of the performance are spread throughout pages 4 -10; acts including Jack Hylton and his band. The two main performers are Bud Flanagan and Chesney Allen, a very successful comedy double act of the time. Interspersed throughout the programme are various advertisements.

In 1926 Bud Flanagan and Chesney Allen teamed up whilst performing for the Florrie Forde Show and became the comic double act ‘Flanagan and Allen’ performing comedy sketches and song.  As the pair’s popularity grew, in the early 1930s, Flanagan and Allen became a part of the very successful entertaining troupe, ‘The Crazy Gang’.

In the early 1930s Flanagan and Allen became a part of the very successful comedy-act troupe that eventually became very well-known as ‘The Crazy Gang’.

Condition Code: 2-3: The programme has some tears approx. 1 -2 cms. and nibbles around the top and side edges of cover. Two staples rusted and cover pages has become detached from centre pages at lower staple only. Approx. 2cm split at bottom of spine. The cover has been effective in protecting the internal pages.