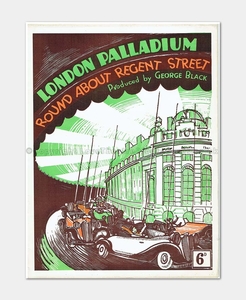 The special theatre programme is made of a thick cream paper printed with black, orange and green inks.  The front cover is a wonderful stylised illustration in green, orange and black ink of a Regent Street ‘merry go round’ roundabout with cars instead of horses to ride. The advertisements in the programme are interesting and informative of life in these times, such as E. Barnett & Co Middlesex & Hampstead, The Largest Kosher Butchers, Poulterers and Provisions Merchants in the UK at the time; an illustration of a horse race and an excellent advertisement for Columbia records Flanagan and Allen record, and many more little gems throughout the programme.

The cast and act list is presented across pages 4 – 10. The acts of this variety performance include Jimmy Gold & Charlie Naughton, Jimmy Nervo & Teddy Knox, Bud Flanagan & Chesney Allen, all members of the Crazy Gang. The Crazy Gang was a six-man variety comedy troupe. In their pairs they were known as ‘Flanagan and Allen’, ‘Nervo and Knox’ and ‘Naughton and Gold’. They were a singing, dancing, acrobatic, comic acting group. The creation of the group happened gradually in 1931, during performances called ‘The Crazy Week’. Nervo and Knox, Naughton and Gold where teamed up with other double acts to create a variety show. Later Flanagan and Allen were invited to join the show. They were not known officially as The Crazy Gang until 1937. The Crazy Gang had an extremely successful stage career and due to their popularity they later on went to make such films as O-Kay For Sound (1937) and Life’s a Circus (1958).

The programme consists of 12 pages including front and back cover pages. Approx. H25cm x W19cms.

Condition Code: 4-5: No tears or folds; This programme is really in wonderful condition for its age.