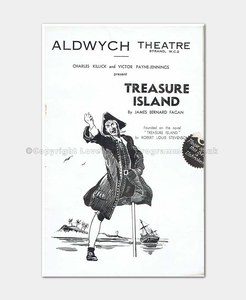 This booklet style theatre programme is made from smooth cream paper printed with black ink.

The original black and white seal sticker still remains on front and back cover pages. This stage-play adaptation of Robert Louis Stevenson’s ‘Treasure Island’ was written James Bernard Fagan (1873-1933). James Bernard Fagan was a successful Irish playwright and manager and actor who, during his wide-ranging career, was a member of Mr Herbert Beerbohm Tree’s acting troupe. He was a well-established figure in the theatre during this era. The cast includes such names as Franklyn Kelsey who plays the villainous rogue pirate ‘Long John Silver’ and Henry Hepworth who (and was kindly lent for this production by Miss Nancy Price) plays the lead character, Jim Hawkins; a young man seeking adventure on the seas.

The cast list is presented across page 9 in order of appearance.

The programme is filled with many informative advertisements accompanied by black and white detailed photos and interesting illustrations. The advertisements promote a varied range of products including Culpeper Balm the ‘aristocrat of powder foundations’, a full page stocking advertisement from Harvey Nichols of London and an advertisement with charming illustrations by the Blue Star Line promoting ‘that long-promised cruise in the Arandora Star’.

The programme consists of 20 pages including front and back cover. Approx. H 22cm x W 14cm

Condition Code: 3-4: The two original staples remain, slightly rusted with minimal rust stain, pages firmly secured. A little wear as expected however this interesting theatre programme is in great condition for its age.

Performance: The Beauty of Bath.