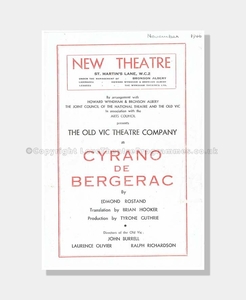 This New Theatre programme presents the Old Vic Company performing Cyrano De Bergerac, a French play written by Edmond Rostand originally in verse and was translated by Brian Hooker. The cast list is a who’s who of eminent actors including Ralph Richardson, Alec Guinness.

The New Theatre was built in 1903 by Sir Charles Wyndham. Sir Charles Wyndham employed the architect William G.R Sprague (1863 – 1933) to build his theatre. Mr Sprague had a successful career and was known for his work as a theatre architect. During its lifetime, the theatre has been renamed twice. In 1973 it was renamed the Albery Theatre after the manager of the theatre Sir Bronson Albery who ran the theatre for many years. In 2006 the theatre underwent a major refurbishment and was renamed Noel Coward Theatre after the famous playwright.

The programme consists of 8 pages including front and back cover. Approx. H 18cm x W 12cm

Condition Code: 3-4: The two original staples remain intact with no rusting, resulting in programmes pages firmly secured. A date notation, discreetly written in ink at top right of cover page, presumably by the theatre goer. The programme is in really good condition for its age.

Performance: My Lady of Rosedale