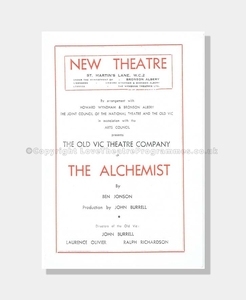 This 1940s theatre programme presents The Alchemist, a comedy written by playwright Ben Jonson, performed by ‘The Old Vic Theatre Company’ and produced by John Burrell.

This production of The Alchemist was performed at The New Theatre on St Martins Lane, London which was built in 1903 by Sir Charles Wyndham. Sir Charles Wyndham employed the architect William G.R Sprague (1863 – 1933) to build his theatre. Mr Sprague had a successful career and was known for his work as a theatre architect. During its lifetime, the theatre has been renamed twice. In 1973 it was renamed the Albery Theatre after the manager of the theatre Sir Bronson Albery who ran the theatre for many years. In 2006 the theatre underwent a major refurbishment and was renamed Noel Coward Theatre after the famous playwright.

Condition Code: 4-5: No foxing, tears or folds. Pages smooth, minimal evidence of any handling. Staples remain and pages firmly secured. The programme is in great condition for its age.