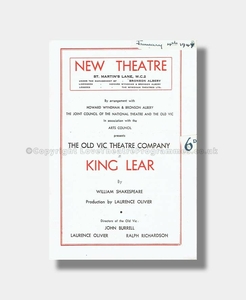 This theatre programme presents the tragic play King Lear written by William Shakespeare and produced by Laurence Olivier. The programme is filled with large informative advertisements and detailed illustrations as well as a black and white photo of Laurence Olivier as the lead male character ‘King Lear’. This production is quite a who’s who of the actors of the time.

There is a particularly interesting special notice insert announcing that The Old Vic Theatre Company has accepted the invitation to play King Lear in Paris at the UNESCO Conference from 25th November. What an honour!

The New Theatre in St Martins Lane, London, was built in 1903 by Sir Charles Wyndham, employing architect William G.R Sprague (1863 – 1933). Mr Sprague had a successful career and was known for his work as a theatre architect. During its lifetime, the theatre has been renamed twice. In 1973 it was renamed the Albery Theatre after the manager of the theatre, Sir Bronson Albery, who ran the theatre for many years. In 2006 the theatre underwent a major refurbishment and was renamed Noel Coward Theatre after the famous playwright.

The programme is made of smooth, white paper pages printed in black and red ink. The original black and white seal sticker on front and back cover remains. The printer’s date printed at bottom left of page six: 11/11/46

The programme consists of 8 pages including front and back cover pages; approx. H18cm x W12cm.

Condition Code: 4-5: Date sticker at top right of cover page presumably by original theatre goer. The programme is in great condition. No foxing, nibbling or tears.