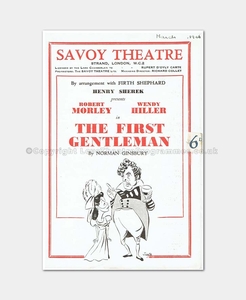 The First Gentleman is a play in three acts about George IV, (when he was the Prince Regent), and the royal family. It was written by the playwright Norman Ginsbury, (1902-1991) and the stage production was directed by Leonard Upton and performed at the Savoy Theatre, Strand.

This mid 1940s programme is a white single sheet of smooth paper which has a vertical spinal fold to create four pages including front and back cover pages. The cast includes the popular actor Robert Morley (1908-1992), playing the strong male lead of Prince Regent of England whilst the lead female character of Princess Charlotte was played by the extremely successful actress of the 20th century Wendy Hiller (1912-2003).

The music of the performance was composed and arranged by Herbert Griffiths and was performed by The Albert Cazabon Quintette. Albert Cazabon was a French musician (1883-1950). His studies in music were extensive and received tutoring form Gustav Holst (Holst composed the great classical works The Planets Suite). During his career he spent time in France, England and Australia and in 1927 received a jubilee medal for his contribution to music from King George V.

On page 3 of the programme there is a useful genealogical chart of the royal family to aid the audience during the show. There are several advertisements promoting local and popular food and beverages of the time on the back cover page 4. The cast list is presented in order of appearance across page 2 of the programme. The original black and white seal sticker still remains on the front and back cover.

The Savoy Theatre was built by Richard D’Oyly Carte in 1881 and is situated in the Strand, London. It was the first public building built with electricity. The Savoy Theatre was built to showcase Gilbert and Sullivan operas which eventually became known as Savoy Operas; the theatre even went on to showcase Gilbert and Sullivan premiers. The theatre also lays claim to showcasing the premier of Blithe Spirit by playwright Noel Coward and Oscar Wilde’s Salome. The theatre is now a Grade II listed building and houses regular stage performances.

Condition Code: 3-4:  No tears or foxing. The programme is in good condition for its age. Date notion in pen at top right of programme front cover presumably by the original theatre-goer.