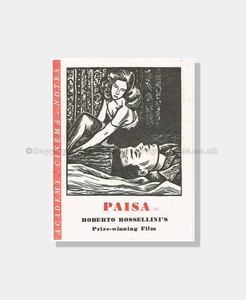 WWII film programme with distinctive artwork throughout, plus synopsis of each episode. Roberto Rossellini needs no introduction; the film consists of six episodes which take place during the Allied advance in Italy. A fascinating interpretation of living history of the moment.

The Academy Cinema, Oxford Street, London opened in 1913 and was an active cinema until it suffered bomb damage in 1940. The cinema reopened in 1944 and continued showing films until 1986. It was demolished in 1989; Marks and Spencer store has been built on the site.