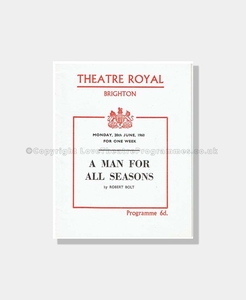 This cute little theatre programme presents A Man for All Seasons starring the Paul Scofield. The programme has the date the play commences, printed as Monday, 20th June 1960 displayed in the centre of the cover page. The programme also includes a full page black and white photo of Paul Scofield on page 3; the cast list is presented across page 12; interesting advertisements with detailed illustrations.

A Man For All Seasons was written by playwright Robert Bolt and tells how Sir Thomas Moore and how he would not support King Henry VIII’s wishes to divorce his wife Catherine of Aragon. It was first performed on stage in 1960 at the Globe Theatre, now known as the Gielgud Theatre, and later went on to be made into film in 1966 and then again in 1988.

The Theatre Royal Brighton was built due to royal command by King George IV (then, the Prince of Wales) in 1806 and opened in 1807. The first performance was Shakespeare’s Hamlet. Though the theatre’s life started with royal patronage the theatre began to suffer until 1854 when it was purchased by Henry J.N Chart and expanded. The Theatre still stands and is currently owned by the Ambassador Theatre group. The Theatre Royal, Brighton is a grade II listed building and has regular stage performances to this day.