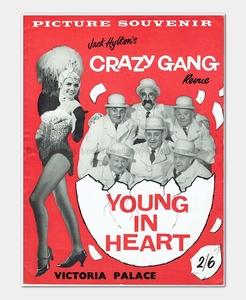 This special picture souvenir programme is for the performance Young in Heart, The Crazy Gang’s farewell show presented by Jack Hylton at the Victoria Place which ran from 21st December 1960 until 19th May 1962. By this time Charlie Naughton and Jimmy Gold were 76 years old!

The programme has interesting articles with many fantastic photographs of the cast and stage performances. The cast are in amazing costumes and the photographs show the energy and passion of each performer in every shot. Includes popular performers of the time including; Jimmy Nervo & Teddy Knox, Bud Flanagan, Charlie Naughton & Jimmy Gold, and Eddie Gray.

16 pages including front and back cover pages. Approx. H28cm x W21cm. The souvenir picture book is of smooth paper and printed in grey, black, red and white inks.

Condition Code: 4-5: The book’s original staples remain and are firmly secure. Pages smooth. No foxing, no tears, no folds.  Overall this programme is in very good condition for its age.