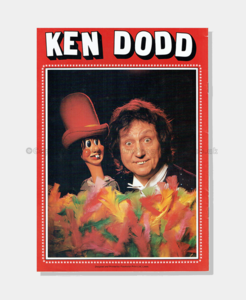 This signed souvenir programme is packed with photographs celebrating Mr. Ken Dodd’s career. The last photograph in the book is of Mr. Dodd holding up his O.B.E presented to him on 19th February 1982. In this pictoral story of events there are photographs of Mr. Dodd being presented to the Queen in 1965 and 1971. As well as pictures of his performance poses there is a montage of photographs of Mr. Dodd with Norman Wisdom, Ted Ray, Jack Benny, Tony Bennett, Frankie Vaughan, Terry Thomas, Bud Flanagan……… Accompanying this souvenir are two inserts: a programme of the evening’s performance and an advertisement for his latest album of that time; also including photgraph of Mr. Ken Dodd signed on the reverse.

A great collection for fans of the highly respected performer.

12 pages including front and back covers; Approx. 30cms x 21cms.