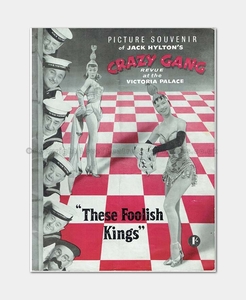 The programme is packed fascinating editorial and photographs of the Crazy Gang and other entertainers in the show, such as the glamourous Tiller Girls famous for their precision dancing.

Except for some Royal Variety Performances, Chesney Allen did not regularly perform with the Crazy gang after 1945 and Eddie Gray re-joined the Gang in 1956

The programme is made up of 16 pages including front and back cover pages. Approx. H28cm x W21cm.

Condition Code: 4: The original staples remain and pages firmly secured. Some minor indications of handling and faint evidence of vertical fold. Overall the condition of the programme is very good for its age.