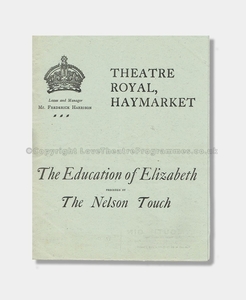 Performance: The Education of Elizabeth

Performance: The Education of Elizabeth

This early 1900 theatre programme is for the performance The Education of Elizabeth, a comedy in four acts by Roy Horniman, in 1907 at the Theatre Royal, Haymarket. The programme also has the cast list for the preceding performance entitled The Nelsons Touch’ a new one act play written by Frederick Fenn (adapted from ‘The Little Pale Man’ by Mayne Lindsay).

Pages 2,3,6,7 are solely dedicated to presenting the programmes advertisements including advertisements for beverages, luxury foods and fine dining. The cast list is presented across page 4 and includes popular actor of the time, Mr Harry Vernon. Mr. Esmond, successful actor and writer was born Harry Esmond Jack in Ireland (1869 – 1922). The cast list also stars Mr Lawrence Grossmith an English actor who performed on film and stage in England, America and Australia (1877 – 1944) and was the son of the popular and prolific English actor George Grossmith.

The Theatre Royal, Haymarket first opened in approx. 1720. It is a West End theatre in the City of Westminster and is the third oldest theatre in London and still holds performances to this day. The writer of this play, Roy Horniman was born in 1874 – 1930 was also a British actor and writer; his most popular work was entitled Israel Rank (1907) on which the famous 1949 black comedy film Kind Hearts and Coronets was based.

The programme is made up of smooth green paper and printed in black inks; 8 pages including front and back cover pages. Approx. H21cm x W17cm.

Condition Code: 4-5:  Original staple remains, slightly rusted but pages firmly secure. The programme has no evidence of foxing, splits or tears Evidence of vertical fold to centre of programme. There is date notation written in pencil ‘Dec. 11th 1907’ on the back top of cover page 8, presumably by the original theatre goer. Overall the condition of the programme is very good for its age.

Performance: Mind Millie for Me