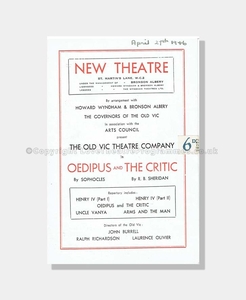 This programme showcases two performances, performed by The Old Vic Theatre Company. The first show is Oedipus by Sophocles (English version by Mr W.B Yeats) and the second show is entitled ‘The Critic’, a tragedy in two acts, written by Mr Richard B. Sheridan.

‘Oedipus’ and ‘The Critic’ were performed at The New Theatre on St Martins Lane, London, which was built in 1903 by Sir Charles Wyndham. Sir Charles Wyndham employed the architect William G.R Sprague (1863 – 1933) to build his theatre. Mr Sprague had a successful career and was known for his work as a theatre architect. During its lifetime, the theatre has been renamed twice. In 1973 it was renamed the Albery Theatre after the manager of the theatre, Sir Bronson Albery, who ran the theatre for many years. In 2006 the theatre underwent a major refurbishment and was renamed Noel Coward Theatre after the famous playwright and actor.

This special little theatre programme contains interesting illustrated advertisements illustrations and full page black and white photographs of Laurence Olivier and Ralph Richardson in costume. The cast list for both performances are presented across the centre pages 4 and 5. The original black and white seal sticker remains on the front and back cover.

Condition Code: 4-5:  The programme has date notation in top right corner of front cover, presumably written by the original theatre-goer. There are no foxing, tears or cuts. No folds and pages smooth; single central staple remains and pages firmly secure. The programme is in great condition for its age.