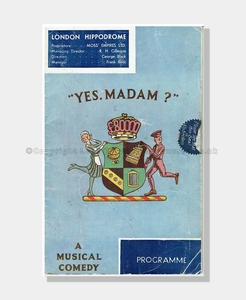 Yes, Madam? is musical comedy in two acts and was based on the novel by Mr K. Browne and adapted into a stage show by Mr R Weston, Mr B Lee and Mr. K.R.G. Brown. Mr Weston and Mr Lee also wrote the lyrics, with the music written by Jack Waller and Joseph Tunbridge. Mr Jack Waller was the producer and supervised the production in its entirety, working closely with the stage director and choreographer. The production has a star studded cast including Bobby Howes and Binnie Hale. An amusing tale: to inherit a large sum, two cousins must stay under the same roof and lots of hilarity and high jinks ensues. In 1939 it was made into a film starring an original stage cast member, Mr Bobby Howes.

The original blue and white seal sticker remains on the front and back cover pages.

Condition Code: 3: Slight rusting to staples but pages firmly secure. The programme is nibbled around the edge due to handling as expected. There is also minimal foxing on the pages. Evidence of small folds to corners of cover pages.

Performance: Variety plus ‘Arms and the Girl’