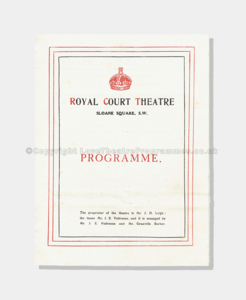 Performance: The Return of the Prodigal

Performance: The Return of the Prodigal

The theatre programme consists of a single piece thick, textured paper with vertical spinal fold creating 4 pages including front and back cover pages. The programme is printed with red and black ink.

The Return of the Prodigal is a comedy in four acts written by St. John Hankin and is set at Chedleigh Court. Eustace Jackson, played by Mr E. A. Matthews, is the son of an extremely wealthy and powerful gentleman, who was sent to Australia five years previously, with a good sum of money to make his fortune; however, being a man of poor ethics and no understanding of responsibility, he returns to his father as a failure hoping to sponge off his family’s wealth.