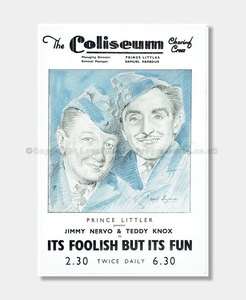 This programme presents a musical and comedy revue to lift the spirits of war-time London. The cast and act list of the show’s performance are across the centre pages 2 and 3. The acts of the evenings show include comedy sketches and musical numbers.

Mr Jimmy Nervo was born into a family of circus owners as James Hollaway in London (1898 -1975). From a very young age he became involved in the family business performing as an acrobat and a high wire entertainer.  When he was 16 he reinvented himself as Jimmy Nervo and started his career as a professional juggler.  Early on in his career he teamed up with Teddy Knox and they became as Nervo and Knox, the comic acrobatic double act touching on singing and dancing. Teddy Knox who was from Newcastle, England, was also a professional Juggler. In the early 1930s Nervo and Knox became a part of the very successful variety troupe, The Crazy Gang.

The programme consists of a single sheet of white smooth paper with a vertical spinal fold to create the programme’s 4 pages including front and back cover pages. Approx. H 19cm x W 13cm.

Condition Code: 4-5: No evidence of foxing or tears or folds. The programme is in great condition for its age.