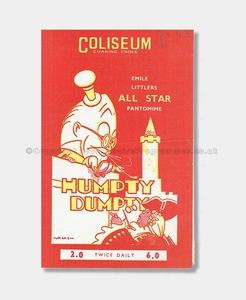 This rare but fun theatre programme is for the performance of Emile Littler’s all-star pantomime ‘Humpty Dumpty’ in 1943 at the Coliseum theatre.

The cast list is presented across page 2&3 and includes popular performers of the time including; Jimmy Nervo & Teddy Knox, Charlie Naughton and Jimmy Gold.

Nervo and Knox are two of the original members of the Crazy Gang, a team of entertainers which were brought together in the 1930s: Jimmy Gold, Jimmy Nervo, Charlie Naughton, Chesney Allen, Bud Flanagan and Teddy Knox.

Mr Nervo was born in London (1898 – 1975), and came from a family of circus owners and from a very young age he became involved in the family business performing as an acrobat and a high wire entertainer. Mr Knox was from Newcastle, England. He started off his early career as a professional Juggler. Nervo and Knox teamed up together as an acrobatic act, touching on comedy, singing and dancing, before becoming a part of The Crazy Gang.

The programme is made up of a single sheet of smooth paper with a central vertical spinal fold creating a 4-page programme including front and cover pages.  Printed in red, yellow, black and grey inks. Approx. H19cm x W12cm.

Condition Code: 3: The programme has some minimal foxing. Evidence of horizontal fold to centre of programme. The date has been written in pencil to the top right of the front cover page written presumably by original theatre goer. Overall the condition of the programme is good for its age.

Performance: The Maid of the Mountains