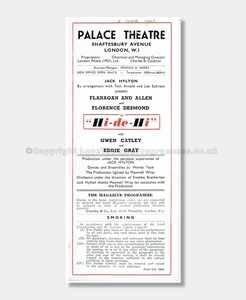 The programme is made up of a single sheet of off white smooth paper with two vertical parallel spinal folds creating six pages and printed in black and red Inks.

This variety theatre performance was produced by Jack Hylton. The programme has some interesting advertisements with some illustrations. The cast and act list is presented across the three internal pages and includes popular performers of the time including Florence Desmond, Gwen Catley, Eddie Gray and Bud Flanagan & Chesney Allen.

In 1926 Bud Flanagan and Chesney Allen teamed up whilst performing for the Florrie Forde Show and became the comic double act ‘Flanagan and Allen’ performing comedy sketches and song.  As the pair’s popularity grew, in the early 1930s, Flanagan and Allen became a part of the gradual creation of the successful entertaining troupe, ‘The Crazy Gang’.

Bud Flanagan, was London born as Chaim Reuben Weintrop, (1896 – 1968).  He became a famous comedian and had a successful career on both stage and screen. He was a very popular world-renown performer particularly remembered for entertaining the troops during WWII and keeping up moral. From a young adult, Bud Flanagan had the good fortune to travel and perform around the globe; in 1915 he enlisted into the during the First World War. During his time in the army he met a Sergeant-Major Flanagan who, by some accounts, inspired the stage name that Bud Flanagan adopted. Chesney Allen was the other half of Flanagan and Allen. Chesney Allen (1894 – 1982) was born William Ernest Chesney Allen and was a popular English entertainer born in London, England. Chesney Allen first started acting on the stage as a serious actor in 1912. In the mid-1920s Chesney Allen having turned toward comedy, joined up with Bud Flanagan and created a successful double act.

The programme is made up of a single sheet of paper with a two-fold, making a six-page programme including front and back cover pages. Approx. H21cm x W9cm.

Condition Code: 4-5: The programme has no evidence of foxing, no rips tears or cuts. The date of performance has been written on top right of front cover page 1, presumably by original theatre goer. The programme is in condition is great condition, especially for its age.