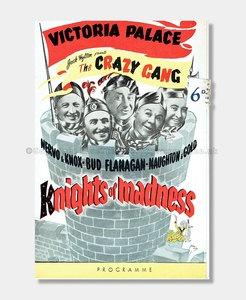 The programme is made up of off white smooth paper and printed in yellow, red, black, white and grey Inks.

This colourful theatre programme is for the performance Knights of Madness produced by Jack Hylton in 1950 at the Victoria Palace theatre. The programme has interesting advertisements with some detailed illustrations. The original white and black seal sticker on front and back cover pages still remains.

Cast list is presented across page 5 &6 and includes popular performers of the time, including Grace Draper, Linda Lee and of-course the famous Crazy Gang.

The Crazy Gang were six-man variety comedy troupe. In their pairs they were known as ‘Flanagan and Allen’, ‘Nervo and Knox’ and ‘Naughton and Gold’. They were a singing, dancing, acrobatic, comic acting group. The creation of the troupe happened gradually in 1931, during performances called ‘The Crazy Week’. Nervo and Knox, Naughton and Gold where pulled together with other double acts to create a variety show. Later Flanagan and Allen were invited to join the show. They were not known officially as The Crazy Gang until 1937. The Crazy Gang had an extremely successful stage career and due to their popularity they later on went to make such films as O-Kay For Sound (1937) and Life’s a Circus (1958).

The programme is made up of 8 pages including front and back cover pages. Approx. H18cm x W13cm.

Condition Code: 4.The programmes original staples still remain and pages firmly secured. Faint evidence of old horizontal fold. The programme has no evidence of foxing and overall the condition of the programme is very good for its age.

Performance: Twenty -To- One