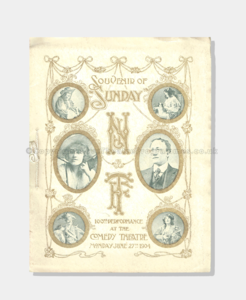 This rare and beautiful programme is particularly special as it commemorates the 100th performance of ‘Sunday’. It has a celebrated cast list starring Miss Julia Neilson and Mr. Fred Terry (Mr and Mrs Terry), who were by this time in their careers also co-producing/managing.

The ornate cover is elaborately printed in gold with photographs of the performers. The programme is bound with beige cord. The first internal page is the cast list and scene details printed in gold on almost transparent paper. The following pages are all full page photographic prints of the actors and scenes from the play, except the portrait of Miss Neilson, which is a sketch.

NOTE: The darker shadow at the top of back cover is indeed shadow from the scanner and not discolouration

Condition Code: 4-5: The internal pages were impossible to scan as they have never been folded open and thus are in such good condition. The slightly over-size cover has protected the pages well. The back cover has a small tear at the top of approximately 1cm and an approx 1cm split at top of spine.

1906 – The Comedy Theatre – The Mountain Climber