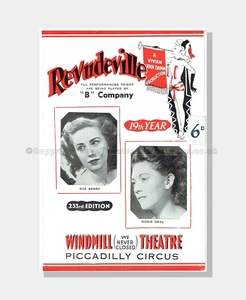 On the front and back covers there are photographs of legendary Windmill Girls.  The internal pages are a mix of informative advertisements and programme of Windmill Girls and entertainers of the performance.

Condition Code: 4: Two staples with slight rusting, pages firmly secured; no foxing; pages clean and smooth. There is a 1cm tear beneath the seal on front cover. This programme is in excellent condition for its age.