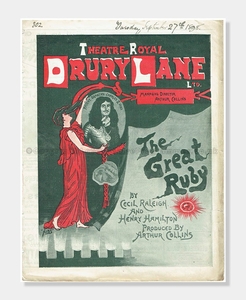 The stunning illustration on the front cover of this very special theatre programme presents a spectacular performance, The Great Ruby. Written by Cecil Raleigh and Henry Hamilton, The Great Ruby was a melodrama, produced by Arthur Collins into an extravaganza. Mr. Collins used the large size of the stage to its full advantage and created extravagant sets and impressive stage effects such as the lifting of the hot air balloon scene.

As so often when Arthur Collins produces a play, it attracts the who’s who in the theatre world.  One particular actress in this cast list had a truly fascinating and successful career:

Mrs John Wood, born Matilda Charlotte Vining, (1831 -1915) was a successful actress and theatre manager in America for the first part of her career. In the summer of 1866 she returned alone to London, England and starred in this play, The Great Ruby, in 1898. However, by the following year Mrs. Wood was managing St James’s Theatre through to the summer of 1872. After a brief return to the USA she then returned to England where she continued her management career until she retired in 1893.

Many interesting advertisements around cast list and synopsis and on back page.

4 pages including front and back cover page; a larger than usual format of approx. 29cms x 22cms.

Condition Code: 3: Although nibbled around all edges including spine, the pages intact and are smooth with no folds. In old style handwriting is the specific date Tuesday, September 27th 1898 presumably written by the original theatre-goer. Also, written in top left corner, 302.

Performance: The Daughter of Madame Angot