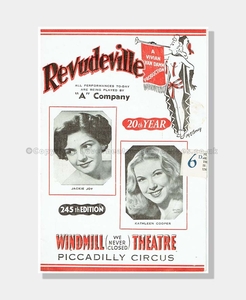 The internal pages are a mix of informative advertisements, illustrations, photographs of the Windmill Girls and the programme of  performance.

The programme consists of 8 pages including front and back cover. Approx. H 19cm x W 13cm.

Condition Code: 4: Original staples with slight rusting, pages firmly secure; small circular mark on front cover above the original seal sticker. No foxing. This programme is in excellent condition for its age.