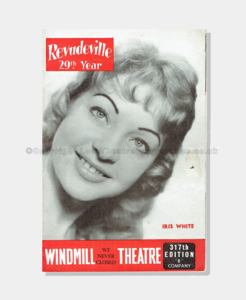 In this Revudeville programme: there is a full cover photo of Iris White, one of the legendary Windmill Girls, and later on in the programme is an interesting article of Miss White, informative advertisements, and photographs of Windmill Girls. The cast list is displayed across the centre pages.

The programme consists of 12 pages including front and back cover. Approx. H 18cm x W 12cm.

Condition Code: 4: Originalstaples, pages firmly secure; an almost invisible nick at the bottom of the back cover page; no foxing.