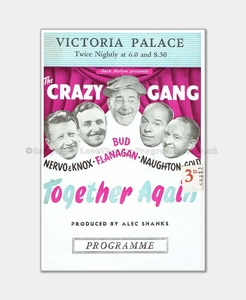 This late 1940s theatre programme is for the performance Together Again, presented by Jack Hylton featuring The Crazy Gang at the Victoria Palace. The programme has a full-page advertisement on the back cover (page 4) of the programme with text and a black and white illustration. The cast list is presented across pages 2-3 and includes popular performers of the time including The Crazy Gang.

The programme is made from smooth paper and printed in blue, pink and black inks. The original red black and white seal sticker remains on the programme’s front and back cover page.

Condition Code: 3-4: The programme has no evidence of foxing. No nicks or tears. Evidence of slight vertical fold to centre of programme. Overall the condition of the programme is very good for its age.