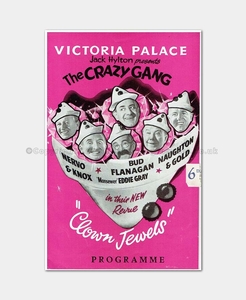 This Crazy Gang theatre programme is for the performance Clown Jewels presented by Jack Hylton in 1959 at the Victoria Palace. The programme has interesting advertisements with some detailed illustrations photographs of the performers. The cast list is presented across page 7 & 8. The programme seal sticker still remains on the front and back cover pages.

The programme is made of smooth paper and printed in purple black, grey, white inks. 12 pages including front and back cover pages. Approx. H22cm x W15cm.

Condition Code: 4: The original staples remain and pages firmly secure. The programme has no evidence of foxing, tears or cuts. Overall the condition of the programme is really good for its age.

Performance: Me & My Girl