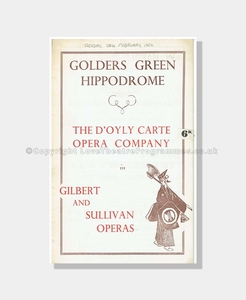 Built in 1913, the Hippodrome Theatre, originally as a music hall but eventually used as pre- and post- West End performances; it was also a popular venue for The D’O’yly Carte Company. In 1969 it was bought by the British Broadcasting Company (BBC) who used it as a radio station and a concert hall. The BBC invited many top rock bands including Queen; top comedy acts; drama and musicals; even boxing was broadcasted from this diverse venue.

Condition Code: 4-5: Has minimal evidence of any handling. Date notation at top of cover presumably written by original theatre-goer. Discolouration in centre pages where the ticket has been kept. See picture.

Performance: Iolanthe and The Mikado