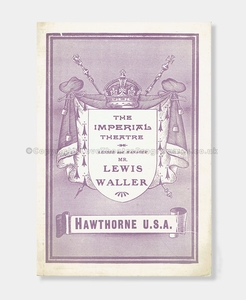 This 1905 theatre programme has a detailed and regal illustration of resembling a coat of arms, on the front cover.

Underneath is the title of the play Hawthorn USA which was described as a light play in four acts by James Bernard Fagan.  The original music of the performance was composed by Mr Raymond Roze.

Page 4 has interesting advertisements relevant to the decade accompanied by some detailed illustrations.

This 1905 theatre programme is a single sheet of cream card with a vertical spinal fold and is printed with purple ink. Consists of 4 pages including front and back cover. Approx. H 20cm x W 14cm

Condition Code: 4-5: No nicks or tears; minimal foxing to back cover. The programme has remained in really good condition throughout its 110+ years.