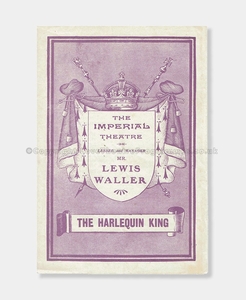 The front cover is a detailed and regal illustration resembling a coat of arms.

Underneath is the title of the play The Harlequin King, a masquerade in four acts, written by Rudolph Lothar and adapted by Louis N Parker and Selwyn Brinton. The overture and incidental music composed by Mr Raymond Roze.

The cast list is presented on page 2 and we see that Mr Lewis Waller, successful actor and Lessee and Manager of the theatre, is playing the main male lead of The Harlequin. Page 4 has interesting advertisements relevant to the decade accompanied by some detailed illustrations.

The programme is a single sheet of cream thin paper with a vertical spinal fold and is printed with purple ink and consists of 4 pages including front and back cover; approx. H 20cm c W 14cm.

Condition Code: 4-5: Date written in ink at the bottom of the back cover page, presumably by theatre-goer, who also noted some actors. Evidence of faint horizontal fold. The programme is in super condition and it appears not to have been handled very much in its life time.