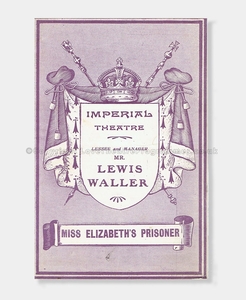 This Imperial theatre programme is a single sheet of cream card with a vertical spinal fold and printed with purple ink. Page 4 has interesting advertisements relevant to the decade, accompanied by some detailed illustrations.

The front cover has a detailed and regal illustration resembling a coat of arms.The centre of the illustration introduces the current Lessee and Manager of the Imperial Theatre, Mr Lewis Waller.

Miss Elizabeth’s Prisoner is a romantic comedy in a prologue and three acts, written by Robert Neilson Stephens and E. Lyall Swete.

The Incidental music was composed by Mr Christopher Wilson.

The Imperial theatre cast list is presented on page 2. Lewis Waller, a successful actor, Lessee and Manager of the theatre, is playing the main male lead of Ensign Peyton and Captain Harry Peyton.

Condition Code: 3-4: Good condition with no specific damage; minor imperfections commensurate with its 112 years as follows: Faint evidence of horizontal fold. Some small marks to back cover due to handling. Mark on lower front cover; 2 tiny rust marks on lower on edge; evidence of fold to corner of top of spine.