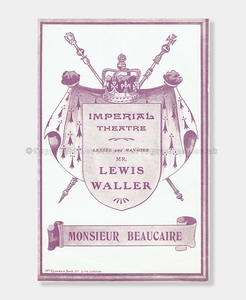 The overture and incidental music was composed by Mr Frederick Rosse.

The cast list is presented on page 2 and we see that Mr Lewis Waller, successful actor, lessee and manager of the theatre, is playing the main male lead of Monsieur Beaucaire.

Page 4 has interesting advertisements relevant to the decade which is accompanied by some illustrations.

The programme is a single sheet of cream card with a vertical spinal fold and is printed with purple ink. It consists of 4 pages including front and back cover; approx. H 18cm x W 12cm.