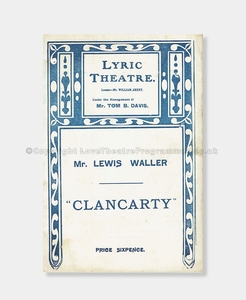 This theatre programme is for the 1907 production of Clancarty, a play in four acts by Tom Taylor, which is based on true historical events about the assassination plot in 1696, including the extraordinary story of Lord and Lady Clancarty’s marriage, of that time.

It stars the popular actor Lewis Waller as Lord Clancarty. Lewis Waller born William Waller Lewis, 3/11/1860 – 1/11/1915, was a popular English stage actor in London Theatre and also a successful stage manager. Over the span of his successful acting career he enjoyed playing more serious roles and often performed in Shakespeare’s plays. The pages hold informative advertisements relative to the times accompanied by detailed illustrations. The cast list is presented on page 6 of the programme.

The Lyric Theatre was the second theatre to be built on Shaftesbury Avenue in Westminster, London and is now the oldest theatre on the street and is a grade II listed building. It was designed by C. J. Phipps and was built in December 1888 by the famous producer Henry Leslie. The Theatre originally held comic operas and later went on to show light comedies to musicals. Interestingly, the Lyric Theatre still uses an electric pump and to this day still uses water to operate its stage curtain which originally pumped water from the River Thames.

Condition Code: 4-5: 2 staples, rusted but pages firmly secured. The internal pages are in such fine condition due to having the card cover.