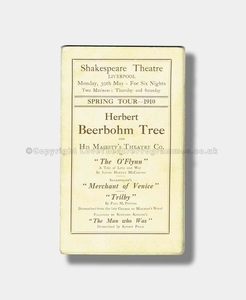 Herbert Beerbohm Tree took his productions on tour on several occasions in the UK and America. This rare and unusual theatre programme is for the Shakespeare Theatre, Liverpool. Made of robust card and designed as a concertina of 6 photographs (5 Mr. Beerbohm Tree, 1 Miss D’Alroy).

The photographs show his imitable ability to ‘become’ the character. Mr. Herbert Beerbohm Tree played the leading role and produced the play. In a time when plays were becoming more minimalistic, Mr. Beerbohm Tree produced an extravaganza of elaborate sets and grand processions and large casting that brought Shakespeare and other classics back into the realms of popularity. Theatre was his life’s work, investor, builder, manager and lead actor. He founded the Royal Academy of Dramatic Art in 1904 and was knighted in 1909.