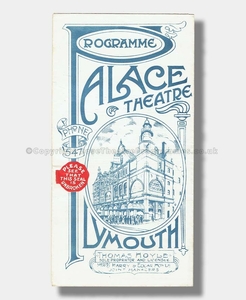 The Palace Theatre in Plymouth was built in 1898 and, except for a spell as a club for striptease, wrestling and bingo hall from 1965 to 1975, it remained a theatre until 1983. At this point its new purpose in life became firstly a discotheque, then The Dance Academy, until 2006, when it was closed due to drugs found on the premises.

The theatre still exists, but sad and deteriorating. Some attempts and organisations have sort to rescue the theatre, but it still awaits its fate. At time of writing, the charity, The Theatres Trust, had put the theatre on its 2019 Theatres At Risk Register deeming it ‘historically and architecturally valuable’.

We sincerely hope that it does not join the lost theatres list.

How this 100+ year old programme has survived at all is surprising as it is made of paper, but it is the exceptional condition that makes it special. This performance was in a time when music hall style variety was very popular and when the Palace Theatre, Plymouth was truly grand.

Condition Code: 5: Excellent condition with no horizontal or vertical folds. No splits or tears. Minimal evidence of any handling. A small circular scuff on the top of back page.