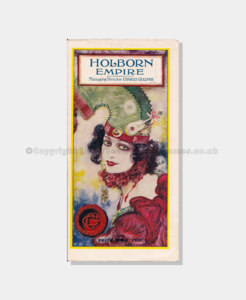 With its glamourous 1920s artwork, this colourful theatre programme presents a Variety of Entertainment.

The Empire, originally Weston’s Music Hall, was opened in 1857 and became the Holborn Empire in 1906. Unfortunately, the theatre suffered war damage and was pulled down in 1960 after many successful productions.

Condition Code: 4-5. A little discolouration to the bottom of the first fold but otherwise excellent condition.