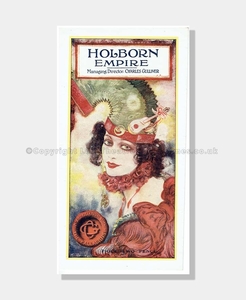 With its glamourous cover artwork, this super theatre programme presents the fantasy adventure: Where the Rainbow Ends. Its particularly large cast includes a 12 year old Jack Hawkins playing his debut theatrical role as the Elf King.

The Empire, originally Weston’s Music Hall, was opened in 1857 and became the Holborn Empire in 1906. Unfortunately, the theatre suffered war damage and was pulled down in 1960 after many successful productions.