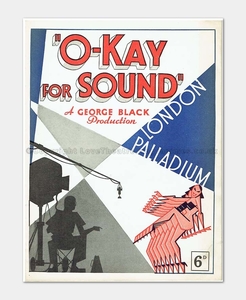 This colourful theatre programme is made of cream smooth paper and printed in black, grey, blue, red yellow inks. O-Kay for Sound was a George Black production. The programme is filled with interesting advertisements Alexandra Park Races, Casani School of Dance, Ok For Sound Columbia Records; among others are restaurant and beverage advertisements, some with detailed illustrations.The programme is dated Monday 7th 1936 on page 3.

The front cover has an art deco style illustration which depicts filming equipment, director in his chair and dancing girls. The cast and programme are presented across pages 4 – 10. The performance has an extensive cast list including Jimmy Nervo & Teddy Knox, Charlie Naughton & Jimmy Gold, Bud Flanagan & Chesney Allen otherwise known as The Crazy Gang.

The Crazy Gang were six-man singing and dancing, variety, comedy troupe. In their pairs they were known as ‘Flanagan and Allen’, ‘Nervo and Knox’ and ‘Naughton and Gold’. The creation of the troupe happened gradually in 1931, during performances called ‘The Crazy Week’. Nervo and Knox, Naughton and Gold where pulled together with other double acts to create the variety show. Later Flanagan and Allen were invited to join the show. They were not known officially as The Crazy Gang until 1937. The Crazy Gang had an extremely successful stage career and due to their popularity they later on went to make such films as O-Kay For Sound (1937) and Life’s a Circus (1958).

The programme is made up of 12 pages including front and back cover pages. Approx. H25cm x W19cm.

Condition Code: 4-5: No tears or folds. Staples are slightly rusted but pages firmly secured. Pages smooth, in fact there is minimal evidence of any handling. Superb condition for its age.