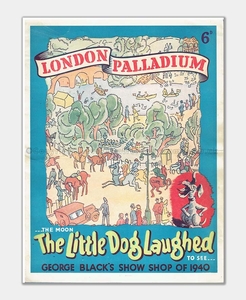 The programme is made up of smooth cream paper and printed in green, yellow, blue, black, red, orange and white inks. The colourful front cover is of a particularly lively park scene with horse riding,couples walking and people boating on the lake. (possibly Hyde Park?). The programme was specifically for the performance on Monday, January 29th 1940 and has interesting advertisements with some detailed illustrations. The cast list is presented across pages 4-10 and includes popular performers of the time including: Jimmy Nervo & Teddy Knox, Bud Flanagan & Chesney Allen, Charlie Naughton & Jimmy Gold, otherwise known as The Crazy Gang.

Performance: To See Such Fun