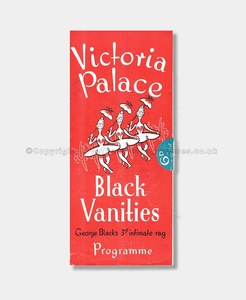 This colourful war-time London theatre programme has a sweet illustration printed in red and black on the front cover (page 1) of happy dancers with their umbrellas.

Black Vanities, George Black’s 3rd intimate rag is an exciting variety act filled with singing, dancing and comedy.  Cole Porter kindly donated the royalties for the use of his song (in this performance) Do I love you, Do I, to British War Charities. The cast list includes a variety of performers including Flanagan and Allen.

Chesney Allen was the other half of Flanagan and Allen. Chesney Allen (1894 – 1982) was born William Ernest Chesney Allen and was a popular English entertainer born in London, England. Mr Allen first started acting on the stage as a serious actor in 1912.

In 1926 Bud Flanagan and Chesney Allen teamed up whilst performing for the Florrie Forde Show and became the comic double act ‘Flanagan and Allen’ performing comedy sketches and song.  As the pair’s popularity grew, in the early 1930s, Flanagan and Allen became a part of the very successful entertaining troupe, ‘The Crazy Gang’.

Performance: The Whirl of the World.