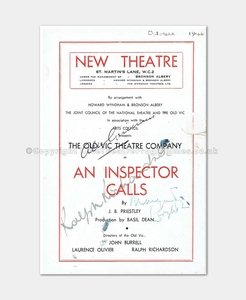 This prestigious, 1940s theatre programme presenting An Inspector Calls is signed by: Alec Guinness, Ralph Richardson, Margaret Leighton, Julien Mitchell and Harry Andrews. The cast list is presented across page 3 in order of appearance and includes very popular actors of the time including Alec Guinness. Alec Guinness (1914 -2000), a prolific English actor of the 20th century, who, in his early days, was a popular Shakespearian stage actor, often working with John Gielgud and Laurence Olivier; after World War II he went on and became an extremely successful film actor. He starred in the classic Ealing Comedies and other well-known films such as Laurence of Arabia and the Star Wars trilogy. Because of his success and influence in British theatre and film industry he was awarded a knighthood from Queen Elizabeth II in 1959.

The programme includes interesting articles with detailed illustrations and has the printers stamp, written as ’30-9-46’ displayed at the bottom left of page 6.

An Inspector Calls written by playwright J.B. Priestley, was performed by The Old Vic Theatre Company at the New Theatre on St Martins Lane, London. The New Theatre was built in 1903 by Sir Charles Wyndham. Sir Charles Wyndham employed the architect William G.R Sprague (1863 – 1933) to build his theatre. Mr Sprague had a successful career and was known for his work as a theatre architect. During its lifetime, the theatre has been renamed twice. In 1973 it was renamed the Albery Theatre after the manager of the theatre Sir Bronson Albery who ran the theatre for many years. In 2006 the theatre underwent a major refurbishment and was renamed Noel Coward Theatre after the famous playwright and actor.

Condition Code: 4: No foxing. Programmes original staples holding pages firmly secure. Date notation in ink at top right of programmes cover page, presumably written by the original theatre-goer. There is approx. 2cm tear (underneath the space where the original seal sticker used to be) centre right hand side of cover page. There are a few ink spots on front and back cover pages from where the ink dripped whilst being signed by cast. The programme is in great condition for its age.